One Christ! Many Churches!

Orthodox Church is a Church that has preserved untainted, the genuine teachings of Jesus Christ, the very teachings delivered to every subsequent generation of believers, down the centuries, from the Holy Apostles, explicated, carefully interpreted by their legitimate successors (their disciples and the holy Fathers), traditioned and conserved unaltered.

Holy Trinity: In Holy Trinity the Father, the Son and the Holy Spirit are three persons, yet One – CO-EQUAL, CO-ETERNAL, CO- ESSENTIAL, CO-EXISTENT. They are in perfect fellowship. This is the model of unity which our Lord and Saviour Jesus Christ desire to be followed between God and men and between men themselves.

Jesus Himself prayed for this: Jn. 17: 21 – that they all may be one; even Thou, My Father is in Me and I in Thee, that they all may be in us, so that the world may believe that Thou has sent ME.  This prayer is used for the unity of Churches. When Jesus prayed this there were not many Churches, but one Church.

The Church was born on the Pentecost Day (AD 33). Not the Physical Church. The word ‘Church’ comes from the Greek word ekklesia (ecclesia) which is defined as ‘an assembly’ of “called-out ones.” The root meaning of ‘Church’ is not that of a building, but of people.

But then as Church grew geographically. If you look into the New Testament, we see the unity in the N. T. Churches. – Jerusalem, Rome, Corinth, Ephesus, Galatia, Philippi, Colossi, Laodocia, …………..

But due to the sin of man the Church divided and re-divided and to day……………… But even in this diversity, unity is possible. There came persecutions, heresies and differences and Church lost unity and fellowship. Unity in faith: Without unity in faith, communion in Holy Qurbana is not possible. Without communion in Holy Qurbana, unity of Churches is not possible. (1 Cor. 10: 16-17) – Cup of Thanksgiving is the blood of Christ, and the Bread is the body of Christ – we partake one loaf, so we are many become one.

The First Persecution, Under Nero, A.D. 67

He was the 6th emperor of Rome. Reigned for five years, great extravagancy of temper, & most atrocious barbarities. Christians were persecuted and killed, during his reign. He ordered that the city of Rome should be set on fire, which order was executed by his officers, guards, and servants. While the imperial city was in flames, he went up to the tower of Macaenas, played upon his harp, sung the song of the burning of Troy, and openly declared that ‘he wished the ruin of all things before his death.’ Besides the noble pile, called the Circus, many other palaces and houses were consumed; several thousand perished in the flames, were smothered in the smoke, or buried beneath the ruins. This persecution was general throughout the whole Roman Empire; but it rather increased than diminished the spirit of Christianity. In the course of it, St. Paul and St. Peter were martyred.

The Second Persecution, Under Domitian, A.D. 81

The emperor Domitian, who was naturally inclined to cruelty, first slew his brother, and then raised the second persecution against the Christians. In his rage he put to death some of the Roman senators, some through malice; and others to confiscate their estates. He then commanded all the lineage of David be put to death. It was during his reign, St. John was sent to exile, to the island of Patmos

Docetism (from the Greek [dokeō], “to seem”) is the belief that Jesus’ physical body was an illusion, as was his crucifixion; that is, Jesus only seemed to have a physical body and to physically die, but in reality he was incorporeal, a pure spirit, and hence could not physically die. This belief treats the sentence “the Word was made Flesh” (John 1:14) as merely figurative. Docetism has historically been regarded as heretical by most Christian theologians.

Two main Heresies, During this Period

Gnosticism is derived from the Greek word gnosis, meaning “to know.” Gnosticism was a second century heresy claiming that salvation could be gained through secret knowledge. Gnostics also believed that the material world (matter) is evil and that only the spirit is good. They constructed an evil God and beings of the Old Testament to explain the creation of the world (matter) and considered Jesus Christ a wholly spiritual God.

These two beliefs clash strongly with accepted Christian doctrine. Christianity teaches that salvation is available to everyone, not just a special few, and that it comes from grace through faith in Jesus Christ (Ephesians 2:8-9), and not from study or works. The only source of truth is the Bible, Christianity asserts. Gnostics were divided on Jesus. One view held that he only appeared to have human form but that he was actually spirit only. The other view contended that his divine spirit came upon his human body at baptism and departed before the crucifixion. Christianity, on the other hand, holds that Jesus was fully man and fully God and that his human and divine natures were both present and necessary to provide a suitable sacrifice for humanity’s sin.

Arianism, a Christian heresy first proposed early in the 4th century by the Alexandrian presbyter Arius. Arius affirmed that God the Father is Uncreated, Self-existent and Immutable; Christ is not truly divine but a created being, not self-existent, cannot be God. Arius asserted that the Son of God was a subordinate entity to God the Father.

Macedonianism had many similarities with Arianism, denying the full personality and divinity of the Holy Spirit. The Holy Spirit was defined as created by the Son and was thus subordinate to both the Father and the Son. In this, the essence of Jesus Christ was understood as similar to that of God the Father. The orientation took its name from Macedonius, who twice had been Bishop of Constantinople.

Apollinarism or Apollinarianism was a view proposed by Apollinaris of Laodicea (died 390). that Jesus could not have had a human mind; rather, that Jesus had a human body and lower soul (the seat of the emotions) but a divine mind. It was declared to be a heresy in 381 by the Council of Constantinople, since Christ was officially depicted as fully human and fully God. Apollinarianism was a 4th-century explanation of the nature of Jesus Christ that was rejected by the Christian church. This teaching was opposed by Athanasius, Basil the Great, Gregory of Nazianzus, and Gregory of Nyssa because they thought it implied that Christ was not fully human. Apollinarianism was declared a heresy by the 1st Council of Constantinople in 381.

Nestorianism emphasized the disunity of the human and divine natures of Christ. The Nestorians are followers of Nestorius (c. AD 386—451), who was Archbishop of Constantinople. According to the Nestorians, the nature of Christ is divided equally between His divine nature and His human nature, but the two are distinct and separate. This idea is not scriptural, however, and goes against the orthodox Christian doctrine of the hypostatic union, which states that Christ’s one nature was fully God and fully man. God the Son, Jesus Christ, took on a human nature, yet remained fully God at the same time. Jesus always had been God (John 8:58; 10:30), but at the Incarnation Jesus became a human being (John 1:14). In AD 428, Nestorius became patriarch of Constantinople. He was from Antioch, and his theological (and political) leanings became clear when he declared Mary to be Christotokos (“bearer of Christ”), not theotokos (“bearer of God”).

Come, all you faithful, let us hasten to the Virgin: for long before her conception in the womb, the one who was to be born of the stem of Jesse was destined to be the Read more…

Nicodemus – Bestower of a Regal and Royal Burial for Jesus

Nicodemus was an honored member of the Sanhedrin, which was the ruling body of the Jews or Jewish supreme council (Jn 7: 50–51). He was a strict Pharisee, (strict disciplinarians, who spend their lives observing scribal Read more… 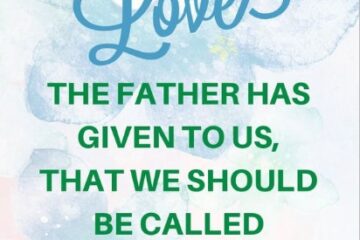 The Son of God became human, because God loves us and wants to make us true children of God. Behold what manner of love the Father has bestowed on us, that we should be called Read more…