Judas Iscariot – The Traitor, The Betrayer, ‘Son of Perdition’

One would say that Judas Iscariot was the supreme enigma of the New Testament, the Apostle who betrayed his own divine master. Very little is told about him in the New Testament, beyond the bare facts of his name in the apostolate, his treachery and his death.  We are told nothing concerning the circumstances of his call or his share in the ministry and miracles of the apostles. Many additional names have ascribed to Judas, such as ‘the traitor’, ‘the son of perdition’, and ‘the betrayer’. Judas is most known for his betrayal of Jesus. The name occurs in the three lists of apostles, in the synoptic Gospels. Matthew and Mark distinguish him by calling him, Judas Iscariot, who betrayed Jesus.  Luke calls him, Judas Iscariot, who became a traitor. It is a significant fact that he is never mentioned without some reference to his great betrayal. The name Judas (Ioudas) is the Greek form Judah (Heb. ‘praised’). This name is commonly found both in the Old and New Testaments. Even in the twelve there were two who bore the name and for this reason he is frequently associated with the surname ‘Iscariot’. Isacriot is well compounded from ish (Heb.) – man and Kerioth or Carioth, a name of a place. Thus Iscariot means a man from Kerioth.  In the first three Gospels, Judas does not appear in the three Gospels, until the scene of the last days of Jesus ministry on earth. But in the fourth Gospel, he makes two earlier, significant appearances.

After feeding of the 5000 there was a movement to make Jesus king by force (Jn. 6: 15). When it became clear that Jesus’ aims were very different, many of his supporters drifted and cease to follow Jesus.  Jesus asked the disciples if they too would desert him. Peter strenuously protested his loyalty, saying, ” Lord, to whom shall we go? ……… (Jn. 6: 68-69). Jesus replied ” Have I not chosen you twelve, and one of you is a devil! “John explains that Jesus was referring to Judas Iscariot who was one day to betray Him” (Jn. 6: 70). In this passage St. John particularly adds a mention of the apostles father’s name, not mentioned by other evangelists.

The fourth Gospel has another story of a lovely deed by Mary of Bethany anointing Jesus with a precious ointment. However Judas reacts that this was a shocking waste, for the ointment and this could have fetched three hundred Denarii (a year’s wages), which could have been given to the poor (Jn. 12: 4-6). John comments that this was not because he cared for the poor, but because he was the keeper the purse / moneybag and he had a habit of stealing what was in it. [The word used is Gk. bastazien means to bear, carry or to lift. To lift a thing means to carry it, but can also means to steal, as in the word shoplifter]. What John was saying was that Judas was a covetous man, who used his position as the treasurer of the apostolic band to pilfer from the common purse. Judas’ position as treasurer is again referred to by the same evangelist in Jn. 13: 29. The Synoptic Gospels however does not notice this office of Judas.

It was Judas who solved the problem of the Jewish authorities to arrest Jesus. All the Gospels tell how Jesus sorrowfully foretold that one of the twelve would betray him. Mark and Luke does not mention the name of Judas, but that he was present on the table of the Last Supper (Mk. 14: 18-21; Lk. 22: 21-23). In Matthew, however Judas asks, “Is it I”. Jesus answered ‘Yes it you” (Matt. 26: 21-25). However John gives a fuller and much more dramatic account.  The disciples had gathered for the Last Supper. At the Passover Feast, among other things, three things were present of the table.

It was common, to place the bitter herbs between two pieces of bread, dipped in Charoseth and eaten. This was called ‘sop‘. Jesus handed over the sop to Judas (Jn. 13: 26).  Judas took the bread. Satan entered into him and he went out, in the night (Jn. 13: 27/30).  {The disciples did not know where and why he was going, or else they would not permit him to go.} John timing of the matter seems to be slightly different, as it is said Satan entered Judas at the Last Supper meal. However in the Synoptic Gospels this event takes place before the Last Supper (Matt. 26: 14-16; Mk. 14: 10-11; Lk. 22: 3-6). There is a difference in the narration of the story, in all the Gospels yet all the four Evangelists agree about the main facts of the actual betrayal. However it is evident that Judas takes the initiative. He is not tempted or seduced by the priests, but approaches them on his own accord. He discoursed with the Chief priests and magistrates, how he might betray Him to them. They were glad and covenanted with the money. And he promised them and sought an opportunity to betray him in the absence of the multitude. Luke and John likewise ascribe the deed to the instigation of the evil spirit. Matthew is the only one to mention the sum paid by the chief priests as the price of the betrayal, thus fulfilling the O. T. prophecy (Zech. 11: 12-13). Thirty pieces of silver, was the price of slave (Ex. 21: 32)

The traitor, came with the multitude or a band of soldiers from the chief priests and brought them to the Garden of Gethsemane, where as he knew, Jesus would be found with his faithful disciples (Matt. 26: 47; Mk. 14: 43; Lk. 22: 47; Jn. 18: 3). The traitor Judas had arranged a kiss as the signal, whereby he might identify Jesus to the soldiers.  It was a custom for a disciple, when he meets his master, to place his hands on the Rabbi’s shoulder, and to kiss him.

Then tragedy engulfed Judas. Only Matthew has a story to tell here (Matt. 28: 3-10), while the others Gospels remain silent. Judas went back to the priests, told them that he had sinned against blood, and besought them to take back their money. When they would not he flung it to them and went out and hanged himself. So this passage tells of his repentance and suicide. He was bad enough to do the deed of infamy and good enough to be unable to bear the burden of the guilt.  The money, which Judas flung, was used by them to buy the potter’s field, for the burial of strangers, as the money was tainted and not fit for any use. In the Acts narrative Judas bought a field with the money and apparently in that field he met with the dreadful suicide in which his body burst and he died (Acts 1: 18). St. Peter attributes the term ‘Akeldama’ probably referring to the ‘reward of iniquity’ as well as the violent death by the traitor.

#All these textual difficulties and questions fade into insignificance, beside the great moral problem presented in fall and treachery of Judas.  Why Judas committed such an act remains most mysterious and unintelligible of sins.  Many scholars have attempted to figure out the mind of Judas, his motives and intentions. How could one of the chosen disciples and enjoying the grace of the apostolate and the privilege of intimate friendship with the divine master, be tempted to such gross ingratitude for such a paltry price. The very fact that Judas was the treasurer of the twelve shows that Judas was trusted in the beginning.

The final event of Judas’ life shows that he no longer lived to serve the Lord, but he lived to serve himself and his schemes. He was no longer inspired by his Master, but by the prince of evil. Judas acted like a Satan, but it may be a grave mistake to think of Judas a demon without any element of grace and goodness.

The liturgical calendar of the Indian Orthodox Church commemorates the Seventy (Seventy-two) evangelists, whom our Lord chose in addition to the Twelve Apostles; and they were sent by in pairs, so that they could preach Read more… 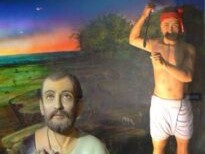 Commemorating the Lancing of St. Thomas, the Apostle – Dec 18

St. Thomas is the Patron Saint of India, set foot in India in AD 52. The Syrian Christians of Malabar in India, claim St. Thomas as their founder. St. Thomas founded the Malankara Orthodox Church Read more…

Paul is seen as a new being in the Christian Church and an architect who worked hard for building the Church. Paul knew more about the work of Jesus only through relation with the Church Read more…